The Gman Squad was a series consisting of the adventures of multiple G-Men running amok around Black Mesa. It was a sketch show, bits where the Gman Squad answered questions, the Gman Squad doing science, Live Action bits, etc. All inter cut with scenes of mic-spamming and a very loose story-line. The show was primarily filmed in Half-Life: Deathmatch Source (HL:DMS) which was included with the abysmal Source Engine port of the original Half-Life. Other times the show would utilize Garry’s Mod to incorporate other content from the Source Engine, like Counter-Strike: Source maps.

How it all began

The first episode of the show was uploaded to the jsXanatos YouTube Channel on December 17th, 2007 they were later picked up by Machinima and the episode was reuploaded to the Machinima Channel on May 15th, 2008. Episode One titled ‘Operation Black Mesa’ totaled 1.5 Million views on both channels through the years. The series started off as a joke after a man named ‘Boris’ decided in a Ventrillio conversation to create a clan for Half-Life: Deathmatch Source (HL:DMS)  – a game nobody played. It was entirely accidental how the show began, ‘Xanatos’ – the director was recording a section of gameplay after they switched to a singleplayer map in HL:DMS and Gman Squad members ‘HKsniper’ and ‘Wolfer’ began running down the halls screaming and killing NPCs and the rest was history.

There’s too many to list, I might as well just put the entire series here, but some that come to the top of my head are Real-Life: The Game , the entirety of the tram bit, Clyde telling it like it is, and not to mention any Crackbone prank call. So much good stuff.

The Gman Squad has aged quite well compared to other Half-Life / Garry’s Mod Machinima series. It’s reliance on both the comedy of the clan and the chemistry of the cast in every episode creates moments and jokes that will be quoted for years to come. For a lot of people, this was their first intro to Machinima and even the Half-Life series itself. The Gman Squad sparked my interest in the series and after spending hours reading up lore on the Combine Overwiki, I was hooked on Half-Life.

What happened to the show?

Unfortunately the Gman Squad faded away due to internal conflicts within the group and after the eigth episode, the magic that had started the series way back when in late 2007 was gone. 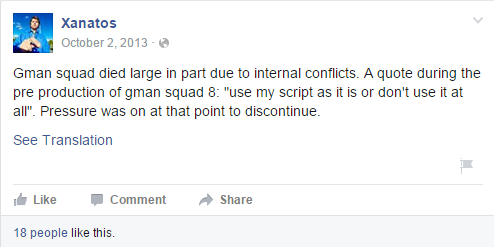 Xanatos on the downfall of the Gman Squad.

Where are they now?

The clan itself these days is mostly made up of original members and people who haven’t touched their Steam profile in a while. Xanatos produced a few more videos for the Machinima channel and some for his own channel. He has a very active Facebook page where he broadcasts his thoughts on current events, life itself and the past.

More importantly, there’s a Gman Army Steam Group created by Xanatos encouraging old fans to join the ranks of this army with no agenda.

When the group was more active, they played classic Counter-Strike maps by Nipper and chat in the group’s Ventrillo. Here’s hoping they start that back up again some day.

In the meantime… check out the show with this Gman Squad Playlist.