The evidence is scattered accross various games, articles and interviews, so it may only make sense when the pieces are put together. Let’s start with the Portal-Half-Life connection. Aperture Science and Black Mesa competed for research funding, which lead to increasingly madder science. It also lead to corporate spying.

1. Black Mesa and Aperture Science spied on each other.

To quote Cave Johnson in Portal 2:

Greetings, friend! I’m Cave Johnson, CEO of Aperture Science. You might know us as a vital participant in the 1968 senate hearings on missing astronauts. And you most likely used one of the many products we invented, but other people have somehow managed to steal from us. Black Mesa can eat my bankrupt-

Eric Wolpaw, one of the writers of Valve’s games, had this to say on Portal:

By suggesting a long-term rivalry between Aperture Science and Black Mesa, we open up possibilities in both games that didn’t exist when they were separate entities.

One panel from the official Portal comic Lab Rat shows Black Mesa technology being developed at Aperture. This might only be an easter egg, though it might mean something more as well: 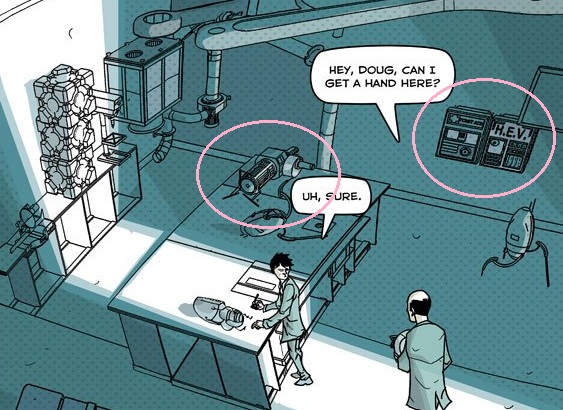 With all this evidence hinting at the existence of double agents, where are these characters? Where are the scientists that worked for both Black Mesa and Aperture Science?

2. We are never actually told how Azian Vance died.

As of the events of Half-Life 2, Alyx’s mother has been long dead. It’s conspicuous how Eli never mentions her dying during the resonance cascade, or the 7-Hour War. This is all he has to say about her:

That picture [of Azian] and Alyx were all I managed to carry out of Black Mesa.

Why does he go to to the trouble of salvaging a photograph of his wife during the disaster? A possible answer: She was already dead and the photo is all he had left. To expand on that: She died when GLaDOS was activated, because she was at Aperture, because she was a double agent.

GLaDOS’ takeover of Aperture takes place before the resonance cascade. In 2010, GameInformer began a series of articles and posts about Portal. This was done in partnership with Valve, so the information there came straight from the source. This series included the Aperture Science event timeline that appeared in the first Portal ARG site, but with some added information:

1998 – The untested AI is activated for the first time as one of the planned activities on Aperture’s first annual bring-your-daughter-to-work day. In many ways, the initial test goes well: Within one picosecond of being switched on, GLaDOS becomes self-aware. The “going well” phase lasts for two more picoseconds, at which point GLaDOS takes control of the facility, locks everyone inside, and begins a permanent cycle of testing. Her goal: beat the hated Black Mesa in the race to develop a functioning portal technology. Days later, that race is lost when Black Mesa successfully deploys an interdimensional gate through which an alien race emerges and effectively ends the outside world.

This tells us that the Aperture disaster happened days before Black Mesa’s. Eli would probably have only just learned that a rogue AI killed everyone inside the Aperture facilities, including his wife. This also tells us a little bit more about Chell. We knew that Chell was present at the bring-your-daughter-to-work event, and that she was child-aged. Now we know that was also the day GLaDOS “adopted” her. 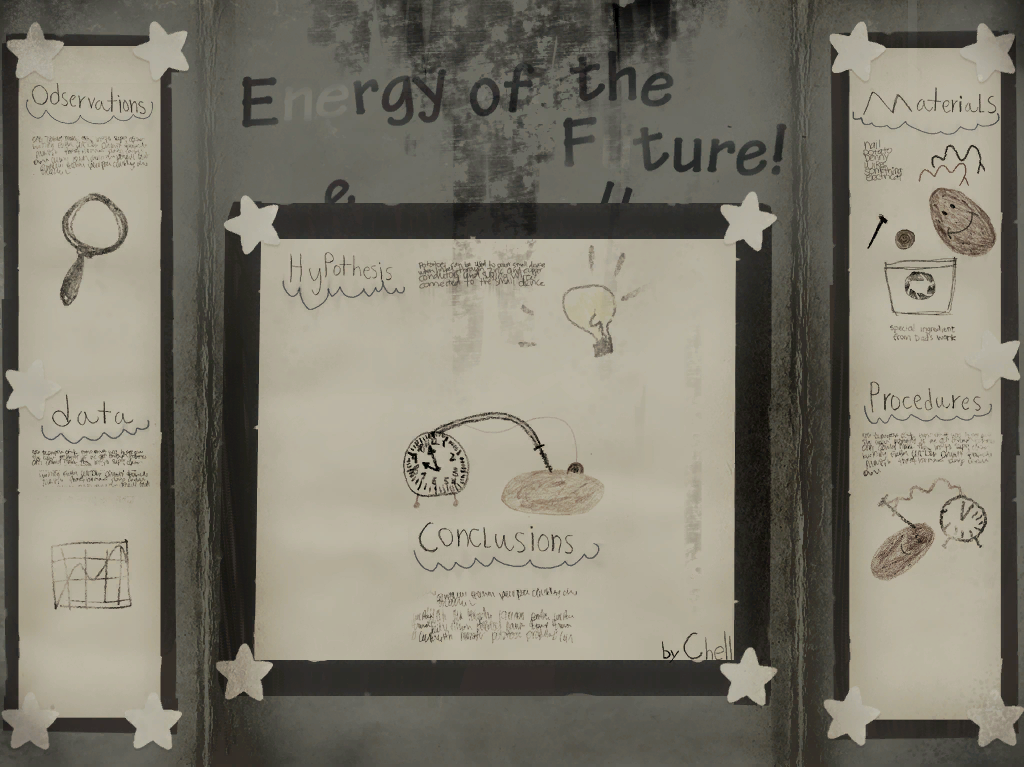 Even if Azian Vance was a double agent, that doesn’t mean she had another child other than Alyx, right? The issue arises with Chell’s race. Chell’s facial features appear East Asian, like Azian’s: 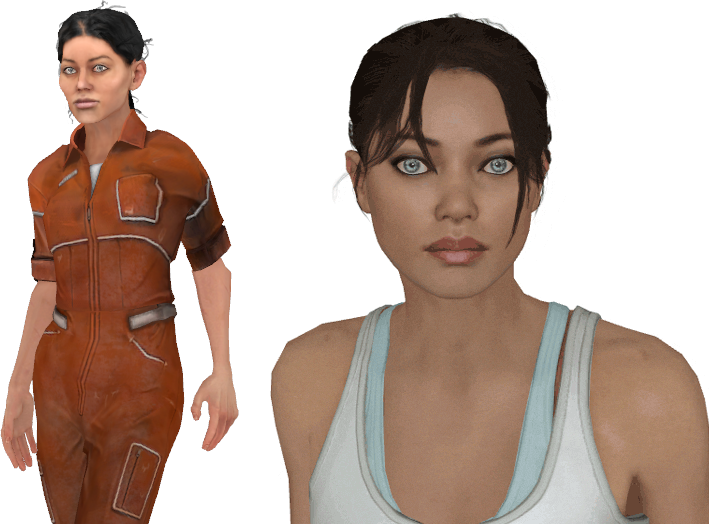 Which suggests she has an East Asian parent. She has blue eyes, and blue eyes are a recessive trait. It’s extremely rare for an Asian dad and a blue-eyed mom to have a blue-eyed baby. This suggests Chell’s mother is likely the Asian parent and the father the blue-eyed Caucasian parent. If this is true, it makes it possible for Azian to be both the mother of Alyx, and Chell, from a previous relationship.

Eli’s negative reaction to the rediscovery of Aperture’s Borealis research ship also suggests an intimate knowledge of its danger. Kleiner, on the other hand, wishes to appropriate the technology onboard:

Eli: [The Borealis] should have been lost forever.
Kleiner: Ah, but now that we’ve found it, we can use it against the Combine!
Eli: Use it? That thing has to be destroyed!
Kleiner: But think of the advantage for humanity! We can’t simply waste all that potential.
Eli: Hasn’t Black Mesa taught you anything? There’s no controlling that kind of power!
Kleiner: Well, yes, there’s always a risk, Eli. But my goodness, we have coordinates… blueprints… hailing frequencies…

Eli’s uncharacteristically visceral reaction in Episode 2 could be better explained if someone close to him had intimate knowledge of the mad science of Aperture. If he hadn’t such a connection to Aperture, he would have likely agreed with Kleiner. His reaction could also be due to having lost his wife and stepdaughter when GLaDOS went rogue.

Chell was present at the bring-your-daughter-to-work-day, as confirmed by the presence of her entry in the event’s science fair. We also know that her father worked at Aperture:

And we also know that the father had to have blue eyes. The character that best fits the bill is Doug Rattman:

In the Rat Man comic, he risks his life to save Chell, and justifies doing so:

Why is it his fault? There is no plausible reason for Rattman to continuously risk himself for Chell’s survival in particular, when it’s already been established GLaDOS is hoarding thousands of other test subjects. 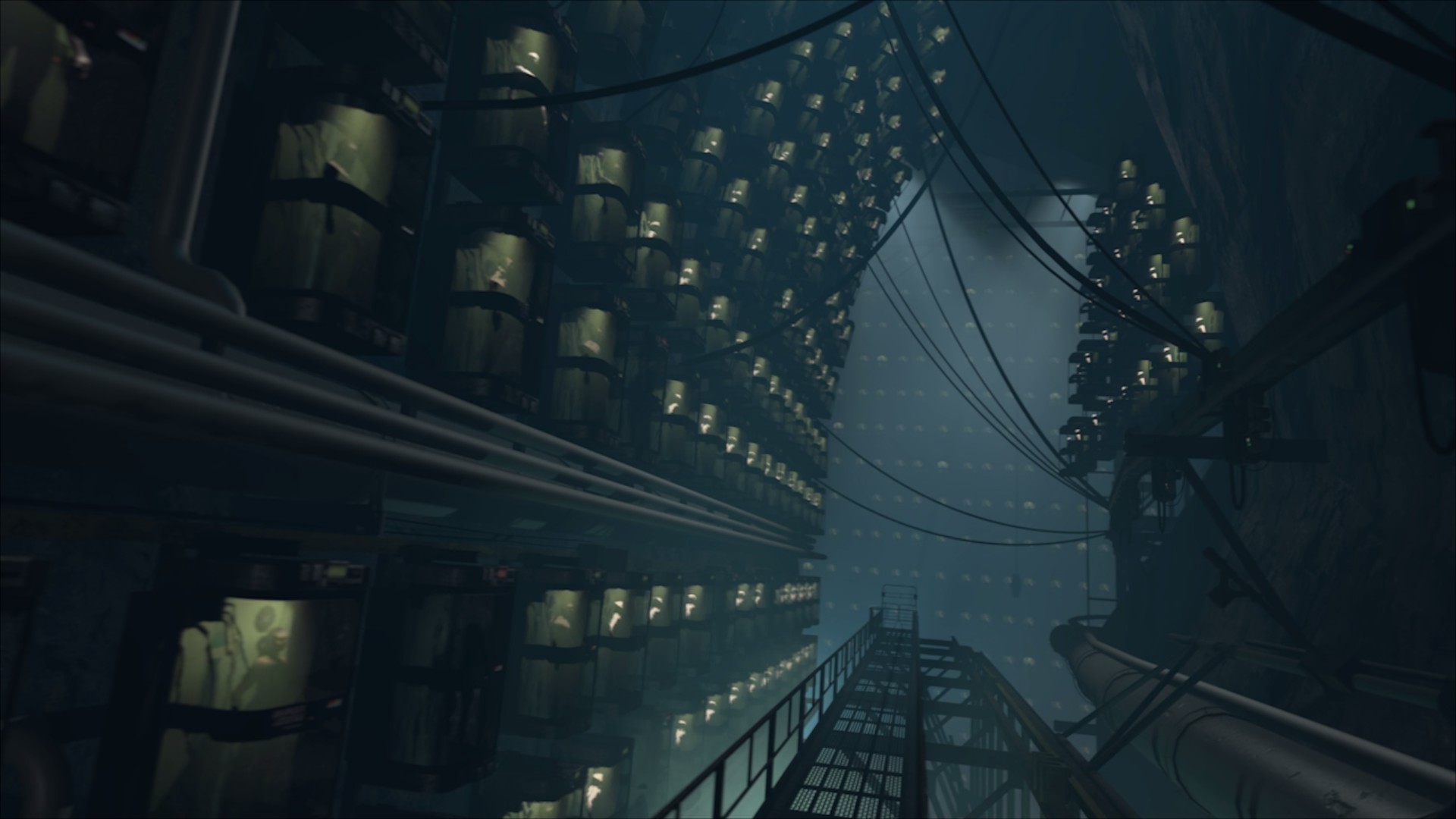 He must have known and cared for her before GLaDOS’ takeover. And since Chell was a child at that point, it would be plausible to suggest he cares because he’s her parent.
It’s also interesting that Rattman kept coffee mugs in his hideouts sprinkled through Portal 2. Many of the mugs read “#1 DAD”: 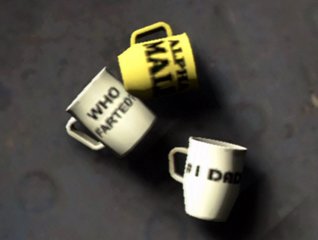 In 2009, Gabe Newell talked with a group of deaf people, with the apparent goal of learning how to integrate hearing-impaired characters into Valve’s games. Samuel Sandoval, the uploader of the footage, summarized the content of the talk:

Just want to show you that Valve Software is the only company that is actually listening to the deaf community and try to blend in a deaf character in the game, possibly in Episode 3. He talks about it briefly in the second clip, so it sounds like maybe an idea that the he or the writers are working on is a deaf character/crush in Alyx’s backstory that influenced her and DOG to learn how to sign as a way of communicating around enemies without speaking. That would be fun to see how that worked into the story, and how the characters would act it out during the game.

This suggests that Alyx has someone in her past who is hearing-impaired or mute. If it is not “a crush”, could it be an older sister? There is evidence to support Chell being deaf or mute. Here is some of GLaDOS’ dialogue:

Are you even listening to me?
You know what my days used to be like? I just tested. Nobody murdered me, or put me in a potato, or fed me to birds. I had a pretty good life. But then you showed up. You dangerous, mute, lunatic. So you know what? You win. Just go.

Do you understand what I’m saying? At all? Does any of this make any sense? Just tell me, ‘Yes’. Okay. What you’re doing there is jumping. You just… you just jumped. But nevermind. Say ‘Apple’. ‘Aaaapple.’ Okay, you know what? That’s close enough. Just hold tight.
If you are alive, can you say something? Jump around so I know you are OK!
You alright down there? Can you hear me? Hello?

Eric Wolpaw has said that Chell is ‘probably’ capable of speaking but that she chooses not to, though he did not confirm this for sure.

In the 2011 interview with Reynoldson Productions, Gabe Newell stated that Alyx would not get along with Chell if they were to meet. He left it vague, so it’s not clear if this would be due to clashing personalities or personal baggage. Here is a transcript:

Reynoldson Productions: Portal is obviously in the same universe as Half-Life, and I’ve been contacted by a bunch of my friends and a bunch of people on the Internet that really want me to ask you if Gordon Freeman and Chell will ever meet in any future games, or if that’s even a thought.
Gabe Newell: When you’re thinking about games, you sorta want to think about how characters collide. In their current forms, Chell and Gordon are very similar characters in terms of phenomelogy of experience. So obviously that is not what people are thinking, having these people co-exist in the same time and at the same place. That’s part of the reason Portal and Half-Life are in the same universe. We see opportunities there. How people would respond to those people not being the player themselves, but in fact characters in the world, that would be a pretty interesting challenge for us. But it’s up to us as designers and storytellers to think how that would work. But right now, they’re actually the player, so having you encounter yourself is obviously not what people are thinking of when they’re thinking of Chell. Actually, I’m curious how Chell and Alyx would get along, given how I think of those two characters and what it would mean in these worlds, what would happen if those two characters encountered each other. Because I don’t think they’d get along, at first.

The last sentence suggests that the animosity could be due to baggage. Perhaps Alyx and Eli think Chell died along with Azian. Chell’s sudden reappearance in Half-Life 3 would no doubt stir negative emotions considering Alyx’s father has just died.

This theory is not incompatible with the one that suggests Caroline is Chell’s mother. While it means she can’t have been her biological mother, GLaDOS still saved Chell while she killed most other people in the facility. She is still her adoptive mother.

It is incompatible, however, with the other theory that Doug Rattman was Chell’s lover prior to her becoming a test subject. Or so one would hope.