This is the blog post he made around the Valve Portfolio, as well as some other HL2-themed design ideas he was cooking up back in those days: “Free Radical, Stalkerbot, And Other Table Scraps”. Let’s start from the beginning with some exposition:

It was 2005, and like a lot of people I was obsessed with Half-Life 2. I was still fairly fresh out of college and possessed of just enough ability, and time, and leftover invincibility that I believed if I worked hard enough, I could put together a targeted concept art portfolio that could get me a job at Valve. […]

I wrapped the images up in a special section of a larger but no less carefully curated portfolio, fiddled with the resume, and then sent the email off to Valve. Riding high, I posted the images on a few artboards including the conceptart.org forums. On CA.org I was roundly excoriated by one poster in particular armed with a short, blunt list of my stylistic and technical shortcomings. Incensed, I clicked to the poster’s profile–who were they to criticize, exactly? It happened to be somebody with an email address that ended with @valvesoftware.com (no, I didn’t recognize the name). I considered it my official unofficial reply from Valve, as none ever arrived in my inbox, and that was that.

Ouch. Rejection is never pretty – no matter if it’s coming from a lady… or from one of the greatest game development studios of all time. Especially when the stuff you’re showing off is actually pretty incredible. Let’s take a look: 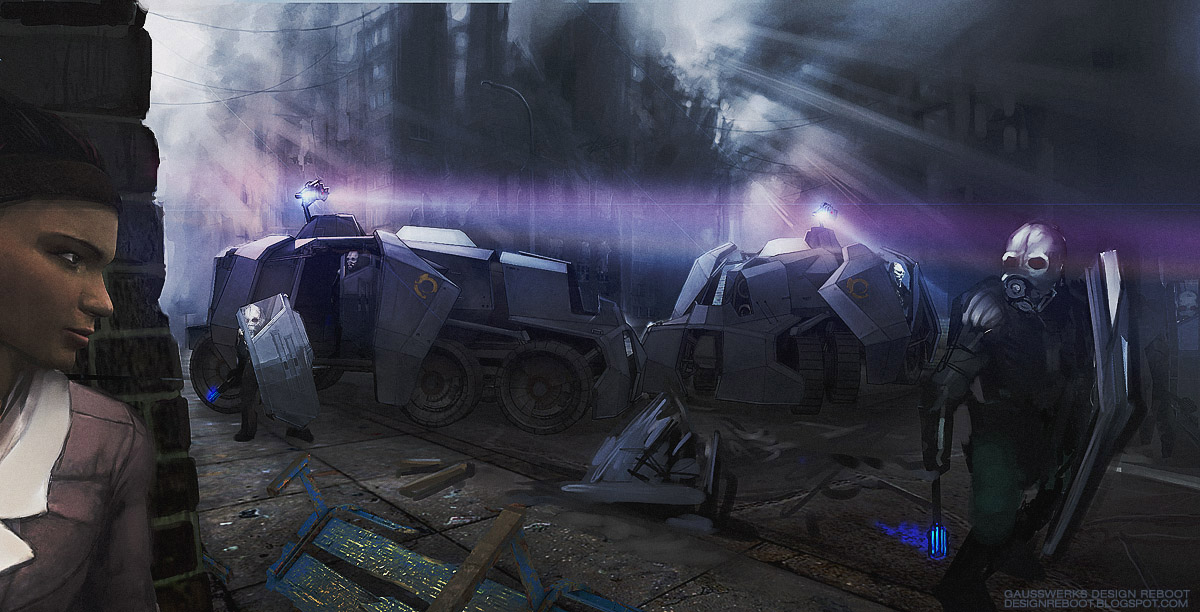 This is his vision (in actuality a retouched version of an earlier, similar piece) of a Civil Protection riot crackdown in City 17. Notice the fancy new armored cars, which, quite frankly, look ten times better than Valve’s HL2 APC’s? Those are his Civil Protection Carriers (also pictured are his riot shields for the Metrocops): 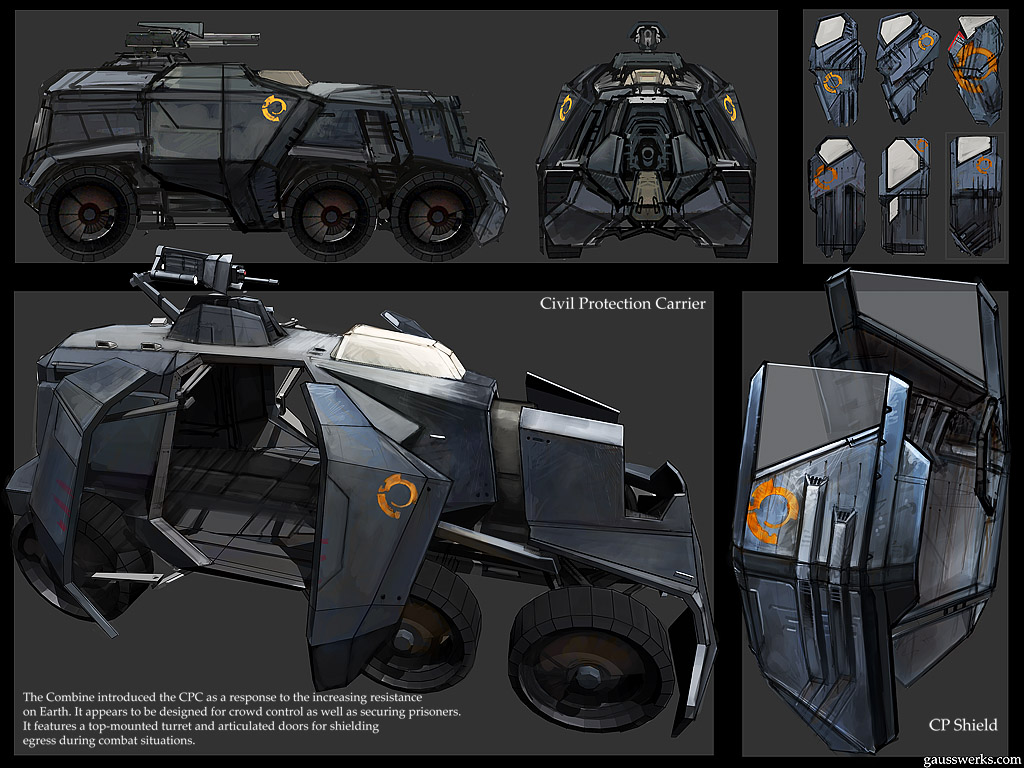 Absolutely terrific! Perhaps a bit too derivative from the original APC, but the new additions like the added wheels, and the much-improved front end look great! Let’s move on to some of his other stuff: 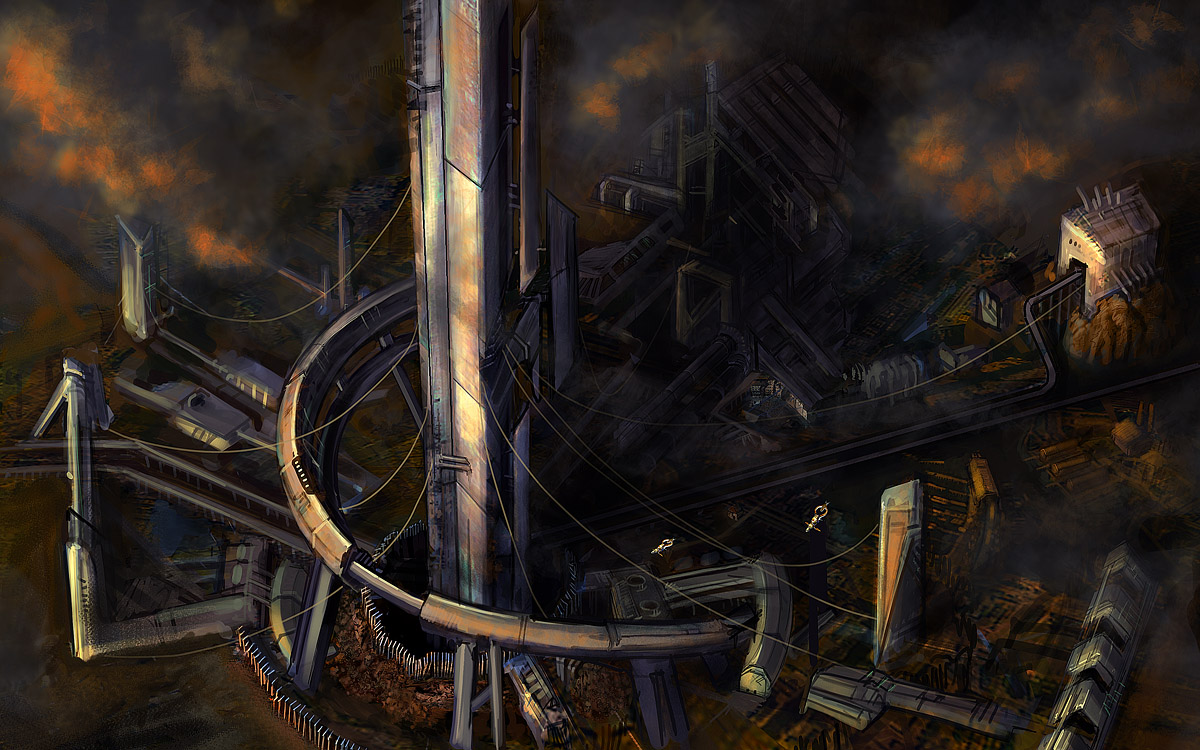 This is his awesome vision of City 16, a heavily militarized industrial center. Walking into City 17’s Citadel might have been a bit of a challenge, even if Breen let us walk right in – but breaking into this thing? I don’t even want to think about it. Let’s take a deeper look at how he sees the Citadels: 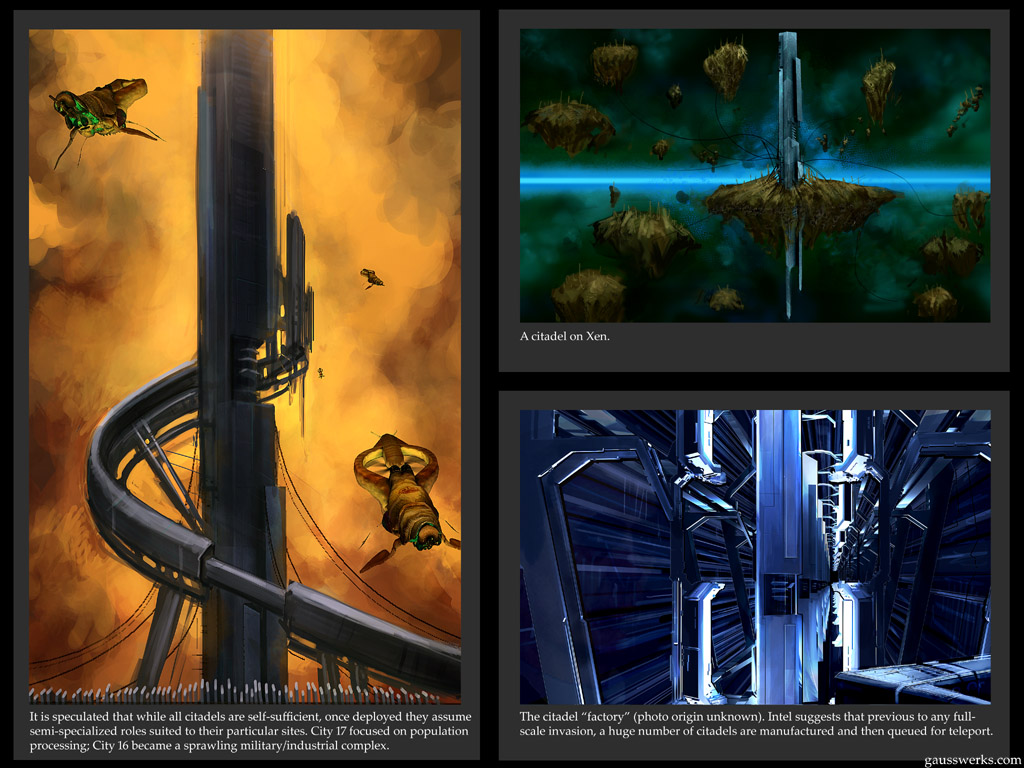 That’s a closer look at City 16’s Citadel from before, on the left. That Xen Citadel on the right looks absolutely stunning – and the concept of the Citadel factory? Pure genius – imagine the scale and size of such a building! It would be the size of an entire city, if not even bigger! 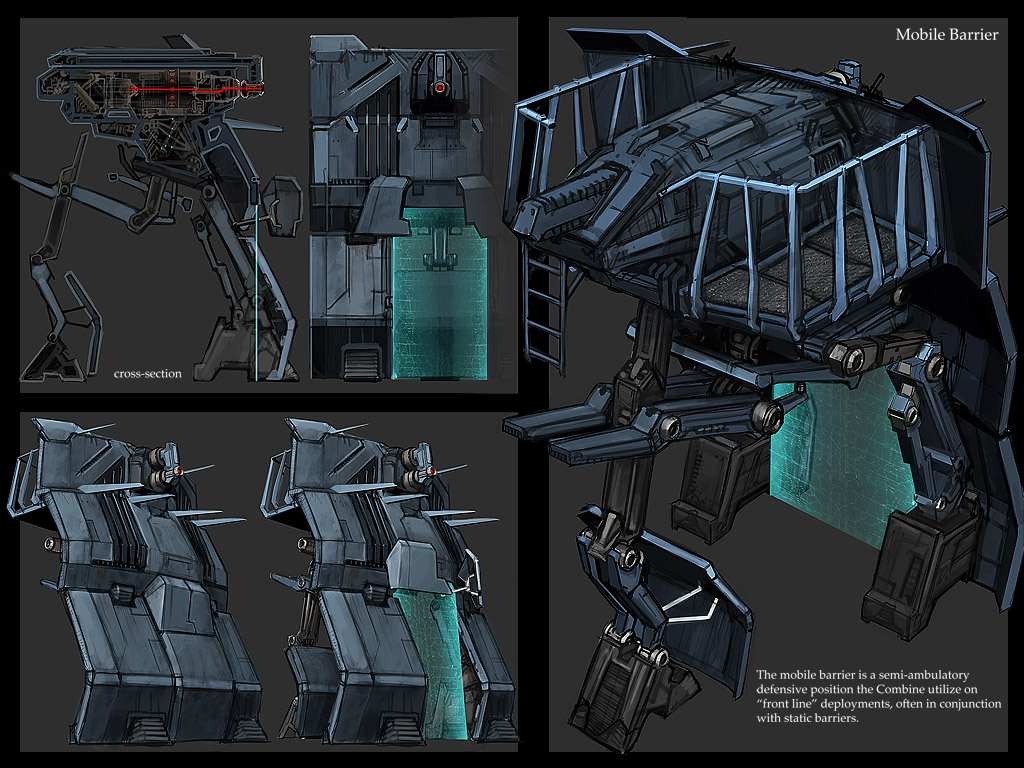 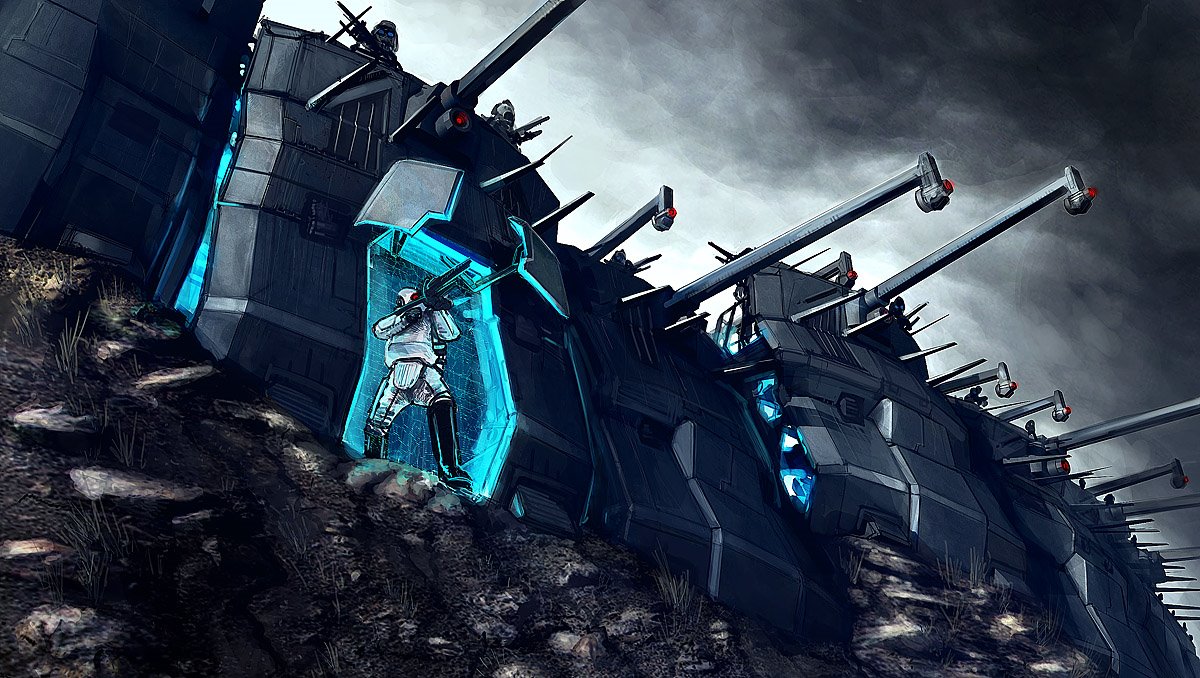 These are his concepts of a Combine Mobile Barrier, a semi-mobile defensive fortification that the Combine Overwatch would use for large-scale engagements. A very interesting concept, but the way this thing would actually work and function seems pretty unclear, and it seems a tad unwieldy.

Free Radical would be the one and only clever name (in the vein of Blue Shift, Opposing Force) for a HL universe project that I ever came up with; the idea itself wasn’t so great. Something about a rogue Combine soldier type’s journey to the other side; maybe early levels would involve fighting against the Resistance but coming round to following Freeman eventually. 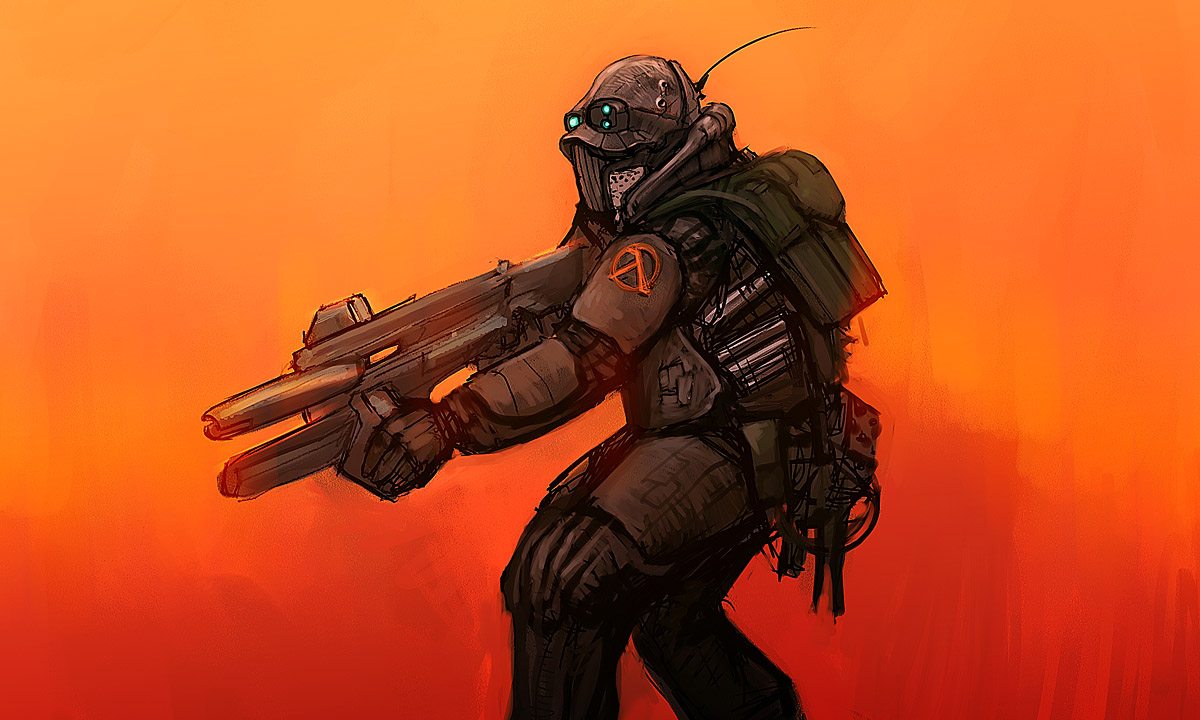 An intriguing concept, but would this really work within the greater Half-Life universe? It doesn’t seem as if the Overwatch soldiers are programmed in such a way to allow any kind of free will – generally, they seem like semi-sentient automatons with little self-awareness. Still, I would love playing a mod project in the vein of Free Radical – aside from MINERVA, very few mods have taken a lowly Overwatch soldier as the protagonist.

Stalkerbot (working title–I suppose Free Radical would have worked here too?) was more ambitious, though still basically a smallish mod project. It was intended as a day in the life experience of someone who slid hopelessly underneath Combine rule.

It opens on a HL2-style limited POV cinematic; periodic time-lapse montage from a vantage point inside an apartment whose walls peel as times go sour. You are a man who watches his wife wither and grow desperate and the (tastefully implied) death of a child from malnutrition. With no other option, you volunteer to become a Metrocop. One of them.

Actually building this thing would have dictated the resolution of the story here (how much Metrocop training/indoctrination?), but I liked the idea of showing how by degrees, even decent people (even you, player) can get roped into evil things. Before long there’s the sequence where the player is an active participant in the brutal suppression of a food riot, probably staged at the very train station from the opening of HL2. You thump on those helpless civilians and it’s probably fun, in that Stalinist regime sort of way. You fall a little further down but at the critical moment there’s an awakening, a forced ultimatum by a superior say, and it pulls you back to your basic humanity.

And for that, you’re hauled away and turned into one of those ghoulish “stalkers” that haunt the corridors of the Citadel. You end up being further dehumanized by random incorporation into an experimental man-machine weapon rig of the Combine (pictured right), and then fight a war-crime worthy mission against the Resistance. It’d be like fighting in a small-sized mech, HUD and all… at which point there again you reclaim one last stake in your humanity and I don’t know, take the Citadel of City ## with you in an enormous explosion. These things always end in explosions. I’m sure it would have been really touching/ass-kicking. 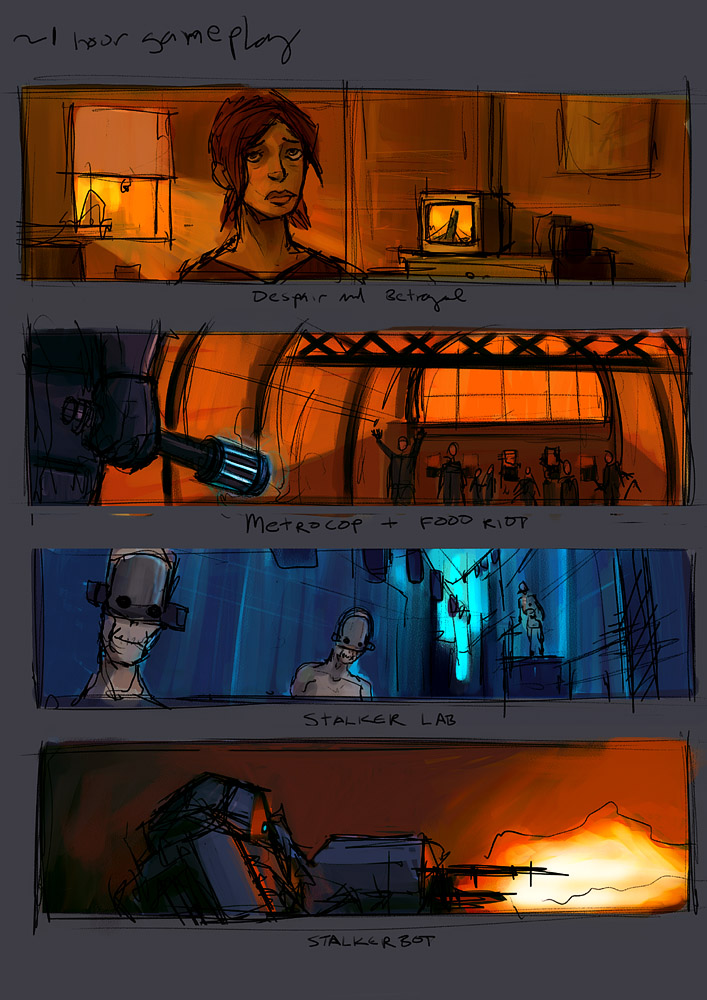 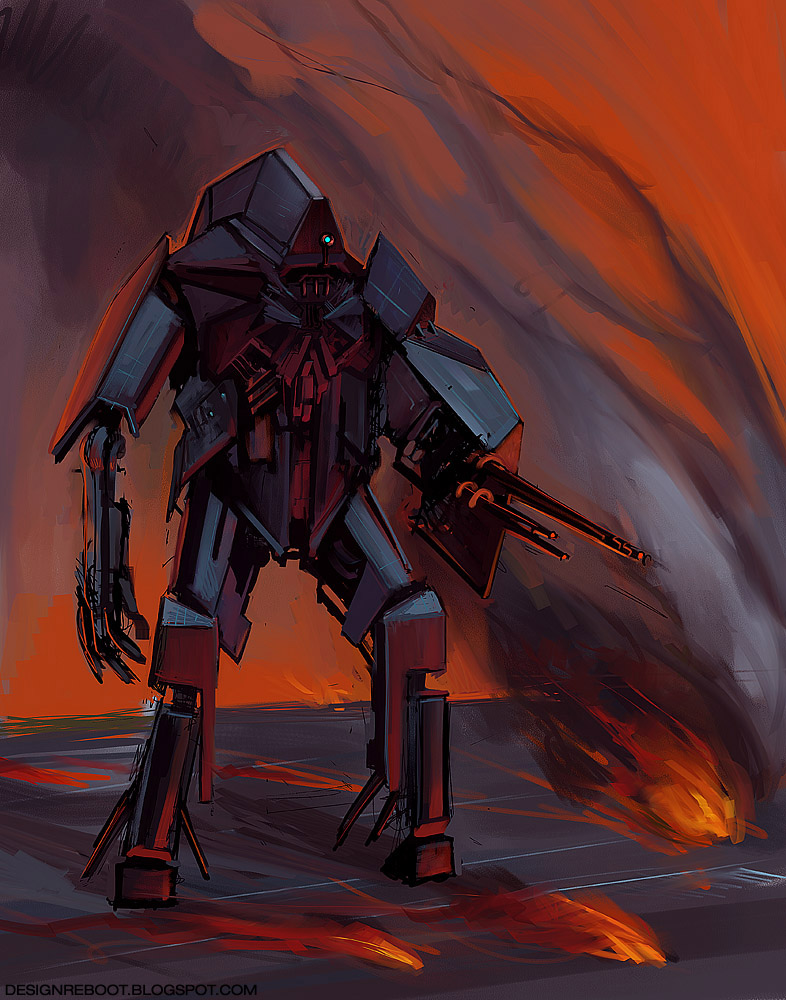 I quite like it! Perhaps the idea of being turned into a Stalker, then a Combine machine and somehow still reclaiming your humanity would be a bit too cheesy and out-of-left-field for me, but it sounds like a really well-done plotline. And the Stalkerbot is a bit reminiscent of the Combine Guard!

Looking back now, my trouble with the all of the above is that they are generally more story-centered than anything that is concretely related to gameplay, which I think is a classic beginner’s mistake.
We are taught to think in stories, perceive the world and recount it to others in stories; it’s very difficult to make the transistion to being a designer who focuses on the gameplay experience of the player and the “story” experience as an outgrowth of that, not as the primary concern.

And I must also point out as a fairly slavish devotee to the House that Valve built, that however much I like the cold moderism of the Combine “stalkerbot” look, I believe it to be at odds with the established fiction. The Combine generally develop bio-weapon/quasi-organic solutions for this kind of thing, as evidenced by the Strider and the deleted supersoldier character seen in the (excellent) “HL2: Raising the Bar” book, not cybernetic.

I see his point, but Half-Life has always been more about the story than the gameplay. I’m absolutely certain that if turned into mods, these two designs (perhaps they could be merged) would make for an excellent Half-Life experience.

Here are some of his final words on the whole “Valve Portfolio”:

Dreams settled back down to the earth and between then and now I traveled extensively and worked on various projects. Years later, I feel rather fond about these illustrations overall, and consider their posting here a kind of exorcism of that old feeling of defeat–I’ve learned since to consider the work itself the reward, and the things that come or don’t as a result entirely secondary. Life as an artist is a lot happier in this frame of mind. […]

I’ve always admired artists that leave out early evidence that they were once mortal men–I’m still terribly mortal, as an artist or a designer, but here’s hoping a generosity of spirit gets me somewhere later on.

Ironically, these pieces instead make him seem more like a human concept art powerhouse, rather than a mere mortal man. However, despite having never seen the original Valve employee response to his work, I suppose I can understand that criticism, and the criticism that Jack applies to this work now – perhaps it was all a bit too derivative of the HL2 universe. I would have focused more on fresher visions of the worlds beyond Earth – the Combine’s dominion on distant alien worlds, for instance, and whatever Citadels, militaries and cultures they may have on those worlds.

And this is also because the next Half-Life will inevitably take us off-world – just as HL2 opened our eyes, giving us a glimpse of Earth beyond Black Mesa; Half-Life 3 will likely finish our business on Earth early on, and open it all up, so that we can see the greater universe (or rather, the multiverse, as the Combine’s rule spreads across many different dimensions).

At the end of the day, it’s important to remember that just as Jack strives for perfection in all his work, so does Valve also strive for perfection in all the people they hire. Of course, Jack’s skills have grown immensely since 2005, so I’d be quite surprised if he wouldn’t get hired now. Still, regardless of whether or not his art eventually makes it in the next Half-Life, we’ll always have this incredible art to look at!

Don’t forget to check out the original Gausswerks blogpost for more.

Thanks to Klow for the initial tip!