Although all of the information that SteamDB handles is already publicly obtainable, it is often very hard to locate without doing some technical digging. That is why it’s two administrators, Pavel and Martin, more better known online as “xPaw” and “Marlamin“, decided to create SteamDB.

The reason that SteamDB is so useful is because it allows people to track updates and releases on Steam in a much more rawer and streamlined fashion, which is particularly appealing to individuals such as game developers and server administrators who need to be constantly aware of the technical changes to apps on Steam. It’s also a highly detailed archive of everything that’s ever happened on the platform. 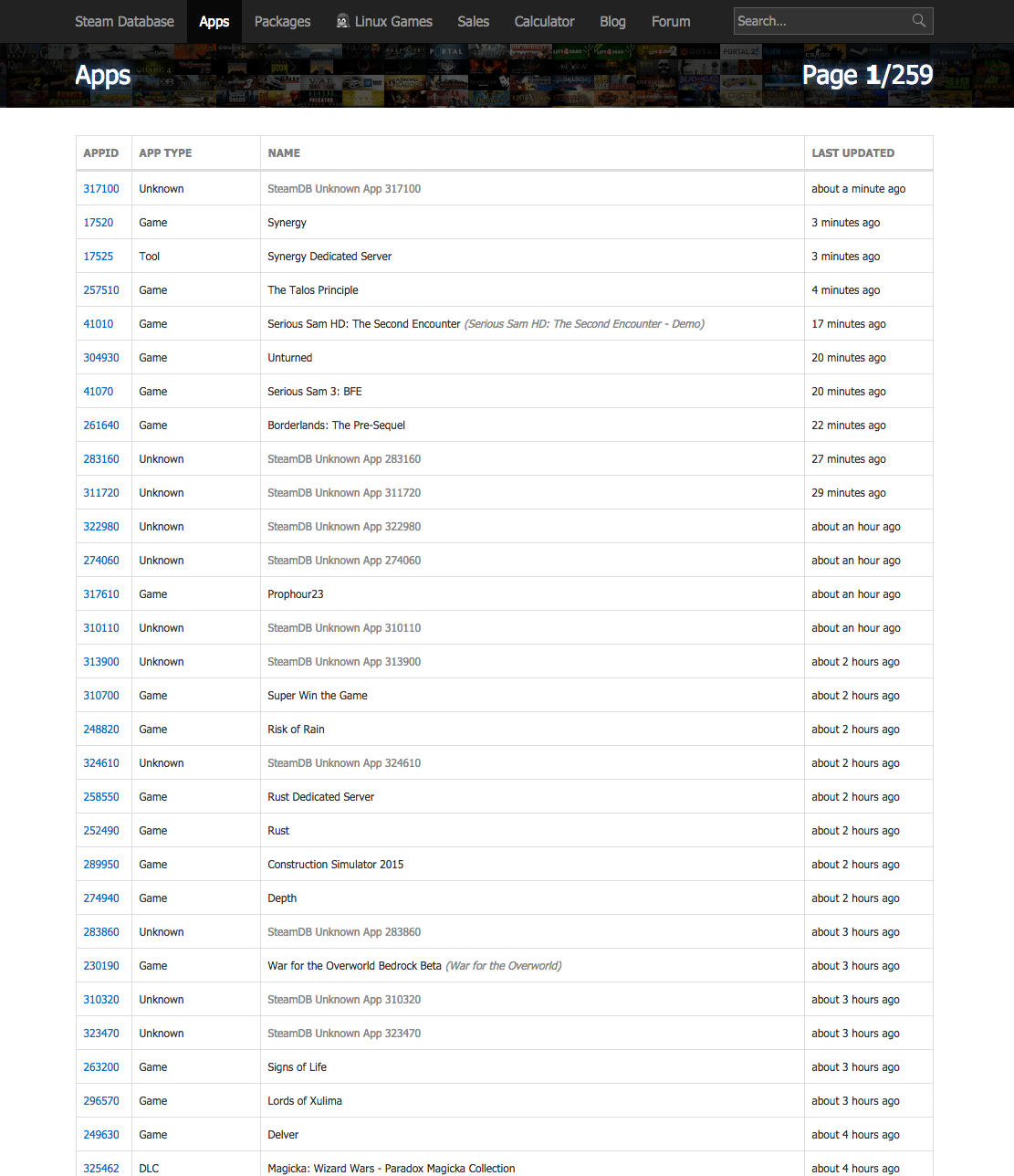 Every application listed on Steam is given a slick, self-contained profile page, which displays information such as system requirements, player numbers, update history and store prices in every available currency. 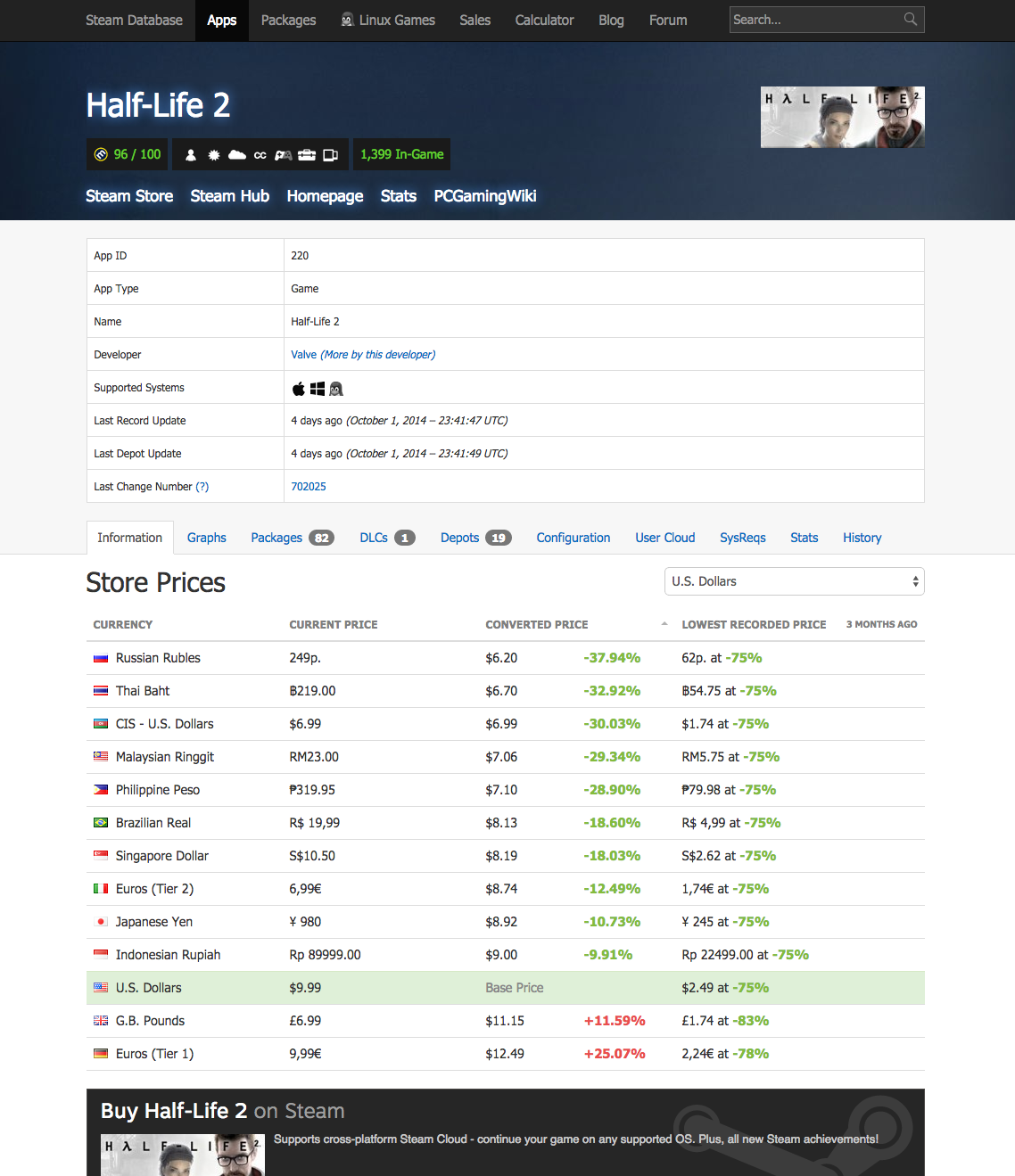 There are also some awesome graphs which display information about current player statistics for both multiplayer and single-player games: 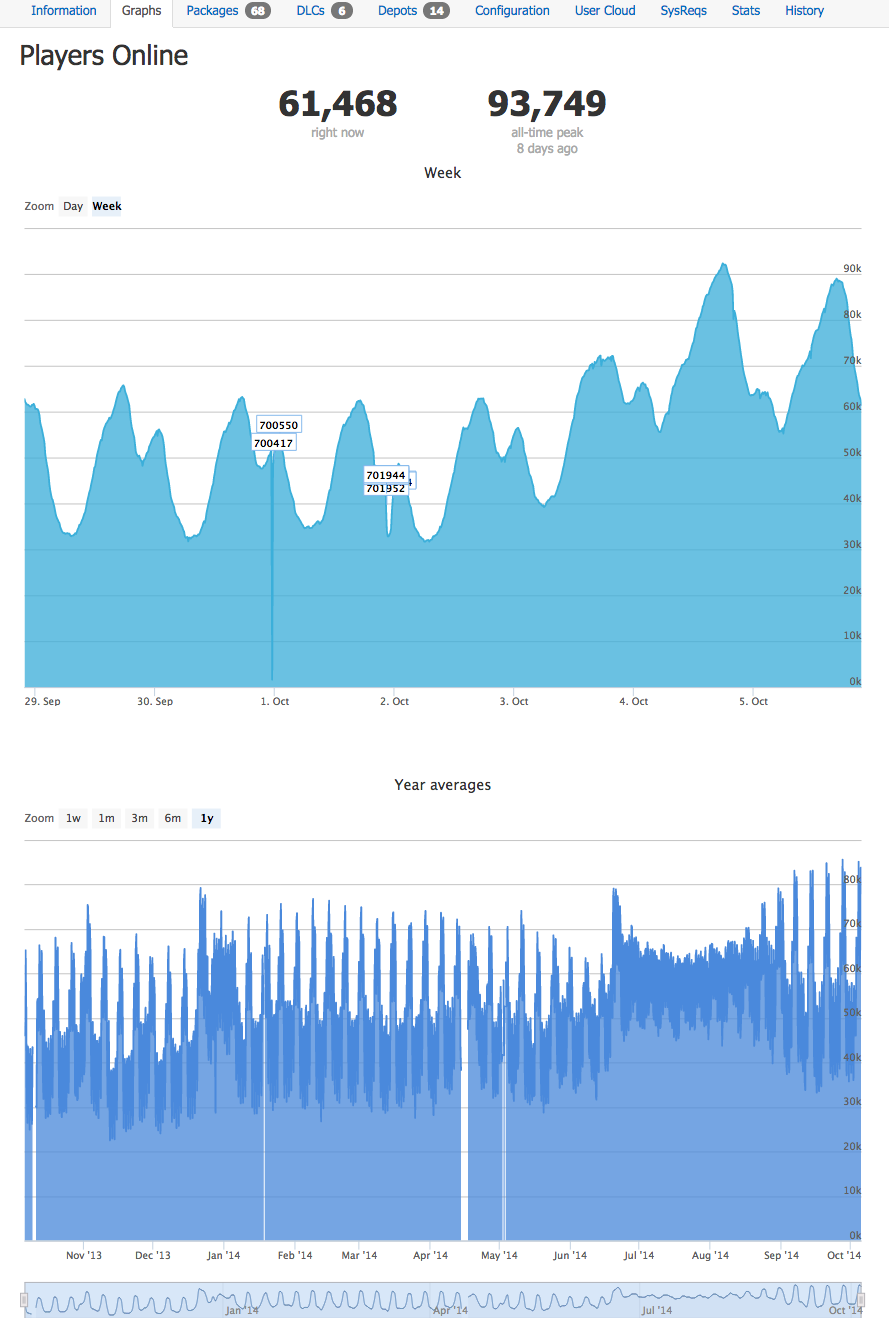 In addition to the database itself, SteamDB also offers several other extremely useful features such as a live Steam Sales list, where you can view all of the current deals on the store. There is also an “account calculator” which adds up the estimated value of your entire Steam account (or even someone else’s!). 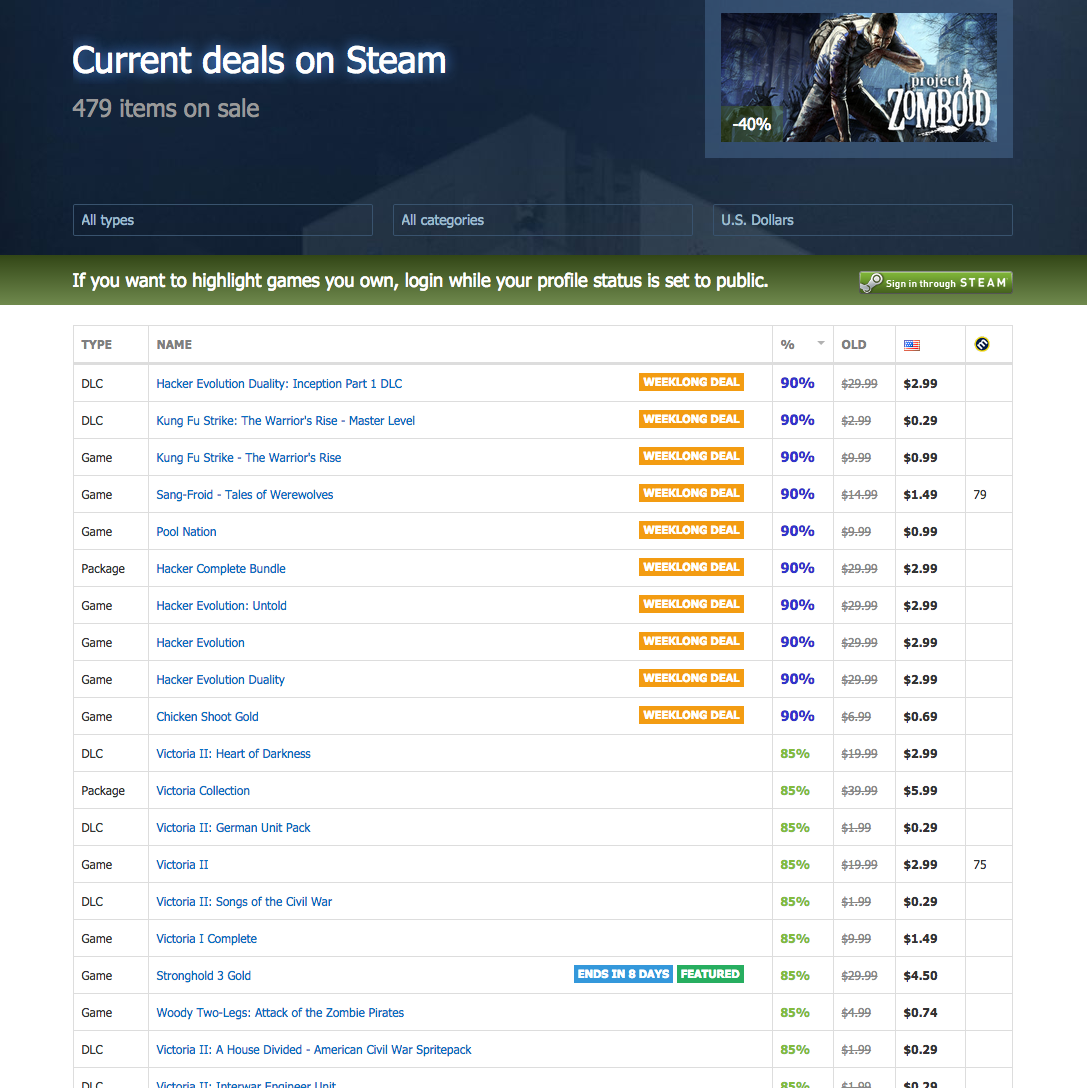 SteamDB shows you a list of everything currently on sale on Steam. 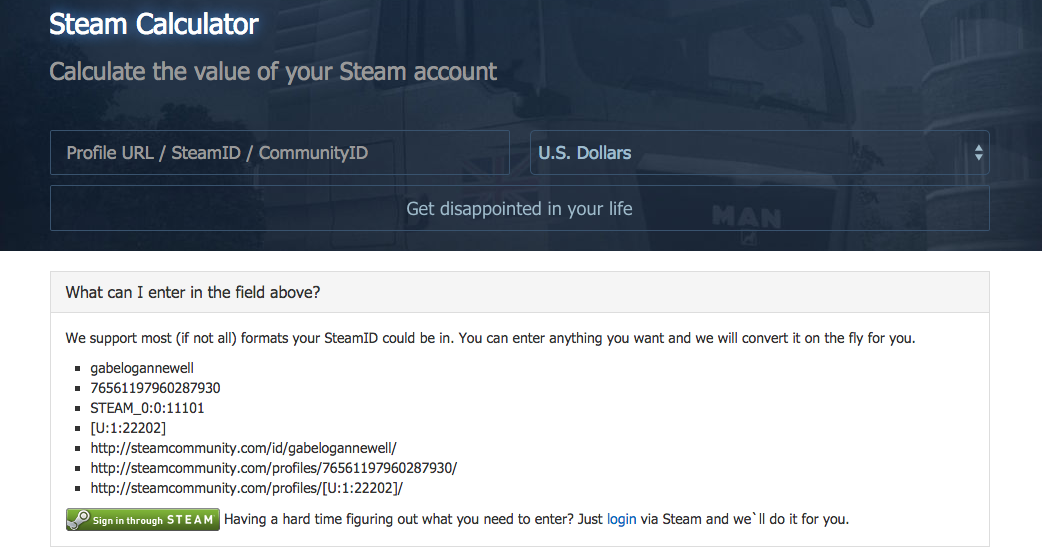 Calculate the value of your Steam Account (or someone else’s!).

Other features include a list of Linux compatible titles, a user discussion forum and Steam Sign-In to allow you to personalise your experience.

We got in touch with the SteamDB team to ask them some questions about the project, which Martin (Marlamin) was kind enough to answer for us.

Hi there Pavel and Martin, thank you for taking the time to answer some questions for us, could you first tell us a little bit about yourselves?

When did you initially start SteamDB and what compelled you to create it?

In early 2012, I made a mini-site to track Steam’s database of apps and subs (then called Content Description Record). When Valve transitioned away from CDR, my site became pretty much useless.

During Valve’s transitioning period xPaw contacted me on IRC (Internet Relay Chat) to ask if I wanted to work together with him on a new website, one that was significantly better looking and much easier to use for people that aren’t very technical or familiar with Steam’s infrastructure… and here we are!

How much time and money would you say you have both put into the project to get it going? Is there anyone else involved?

Money wasn’t really an issue, the server was already being paid for. We spent a lot of time in the first few weeks to get a basic set of features working which back then was just viewing apps and subs. Ever since then we’ve added a ton of new features including but not limited to: tracking history of apps/subs, store prices/sales page, calculator, steamstat.us, a forum and a blog for posting things that are too long for Twitter.

These days most of the site and backend things are handled by xPaw (who is clearly a superior programmer compared to me!). I just manage our Twitter account and do other community related stuff such as this.

As for other people involved, our Linux page is in part powered by a community-ran repository on GitHub.

For those who don’t know how it works, could you tell us a little bit about how you get all of this information from Steam?

We have an application powered by SteamKit (a framework for interacting with Steam) that constantly asks Steam servers for the latest application and package/sub updates. It’s basically what the Steam client does when you have it running in the background, we just ask for updates more often. When we receive word that something changed we compare it to the previous version, update it in our database and display the differences on our site. The backend application can be found on GitHub.

Why do we need to know this information, how does it benefit people?

The regular Steam user probably doesn’t need most of this information. Many of our users are fans of certain games and want to stay informed if anything at all is updated, a lot of other users also use SteamDB to track region locks. Some users are developers with apps on Steam and like the information that SteamDB provides in an easy to read format.

On average, how many visitors a day would you say SteamDB receives?

We get about 20k unique visitors and between 70k-100k pageviews a day. Our pageview record was during the start of this years Steam Summer Sale with over 900k pageviews on a single day.

Have you ever had any direct interaction with Valve or their employees in relation to SteamDB?

We have a lot of contact with Valve employees. We track many Steam related things and often notice bugs or security issues which we then report. Some Valve employees even hang around in our IRC channel.

A while back we also co-wrote a public letter to Valve regarding their security practices to which they responded by making a new “security” page.

As for what SteamDB does, most Valvers we’ve talked to in the past are fine with it.

There are no advertisements on SteamDB, how do you guys cover the running costs?

Donations and money out of my own pocket, we’ve had a bunch of offers from advertising companies and people wanting to buy our site but we’ve refused all of them.

Do you have any plans for adding new features to SteamDB?

SteamDB is pretty much feature complete right now. We have a browser extension for Steam and Firefox that adds SteamDB links to Steam websites. xPaw recently added some optional enhancements for Steam websites.

We also keep an eye on our forums, Twitter account and GitHub issue tracker for feature requests by the community. If it’s a good idea that’s not impossible with the data we receive can request from Valve, we’ll probably add it.

Finally, just out of interest what would you say your favourite Valve and Non-Valve games are?

xPaw’s favorite game is probably Counter-Strike: Global Offensive. As for non-Valve games, he likes the BioShock series and Borderlands.

Check out SteamDB for yourself over at steamdb.info.

They are also accepting donations to keep the site AdFree.