To celebrate CombineOverWiki’s 10th anniversary, the team behind it are running a giveaway on the site’s official Facebook and Twitter accounts, where you can enter to win from a prize pool of Black Mesa, Half-Life 1 Anthology and Aperture Tag. The giveaway ends later today, so hurry if you want to enter.

The Combine OverWiki staff are proud to announce that, on February 12, 2016, the wiki will have been operating for exactly ten years. We owe it to you, the community, for a decade’s worth of unerring support which has allowed the wiki to reach this milestone today.

To commemorate the special occasion, we are running a giveaway for some of our favorite titles from the Half-Life and Portal series: Black Mesa, the Half-Life 1 Anthology, and Aperture Tag (requires Portal 2).

For those who are unfamiliar, CombineOverWiki was previously hosted on the Wikia platform, but became an independent, ad-free wiki in 2011. The site contains a HUGE amount of high-quality, well-edited information about everything and anything Half-Life, which is maintained by a team voluntary contributors. The wiki also covers the Portal series in-detail too, as well as fan creations – they even made us a page on there! 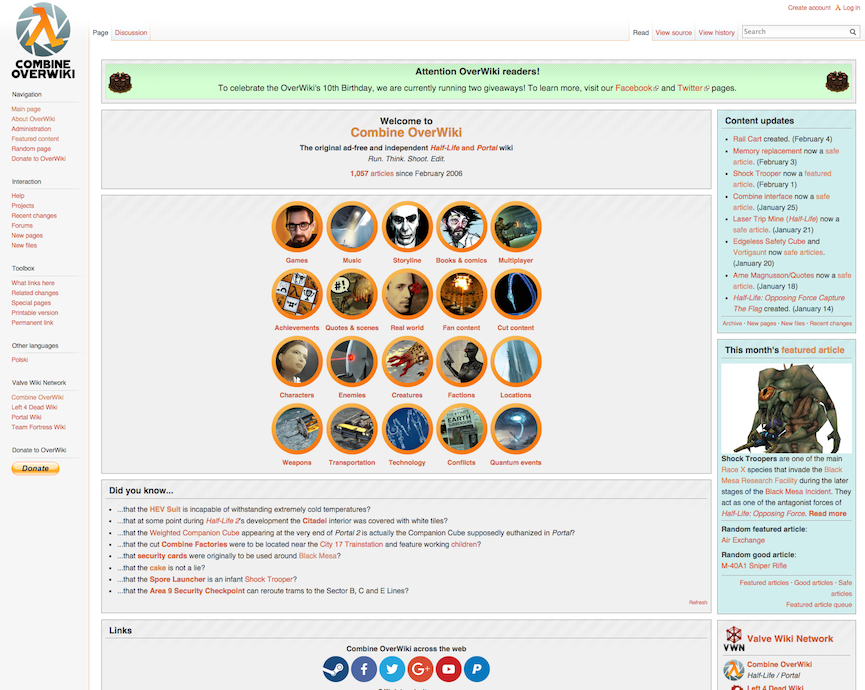 If you’re interested to know more about CombineOverWiki, you can read our previous Community Spotlight feature about the site here. You can also sign-up and get involved with the wiki yourself here.

The team at LambdaGeneration would like to thank all those who have helped to make CombineOverWiki what it is today. The site has become a vital part of the Half-Life community, and demonstrates the amazing power of community collaboration, passion and commitment that we see from the game’s fan-base.