Dota 2 is the first Source 2 game.

It’s for real this time, ever since the Dota 2 Workshop Tools Alpha dropped the Dota community has been anticipating the big switch to Source 2. Now it’s finally happened. During E3 week of all weeks. This update is still in beta form so all you have to do to get the Source 2 beta update and the tools is to just head to the ‘Play’ tab and select ‘Dota 2 Reborn Beta’.

Not only do the tools include updated versions of what we saw in the Alpha, there’s even a new version of Source Filmmaker. It’s identical to the other Source Filmmaker in almost every way, with some minor changes. Currently, there’s no real reason to switch over to the Dota 2 SFM, unless you’re creating a Dota specific movie.

Now that Dota has moved to Source 2, maybe we can finally get Diretide this year?

What on Earth? Not only is Chell back in brick form, GlaDOS and Wheatley return as well. With Ellen Mclain and Stephen Merchant returning to the roles respectively. Lego Dimensions won’t be coming to Steam, but PS4, PS3, Xbox 360, Xbox One, and Wii U owners will get to enjoy the pack when the game launches, September 27th of this year. (Though I imagine people will buy the pack just for the Chell Mini-fig.) 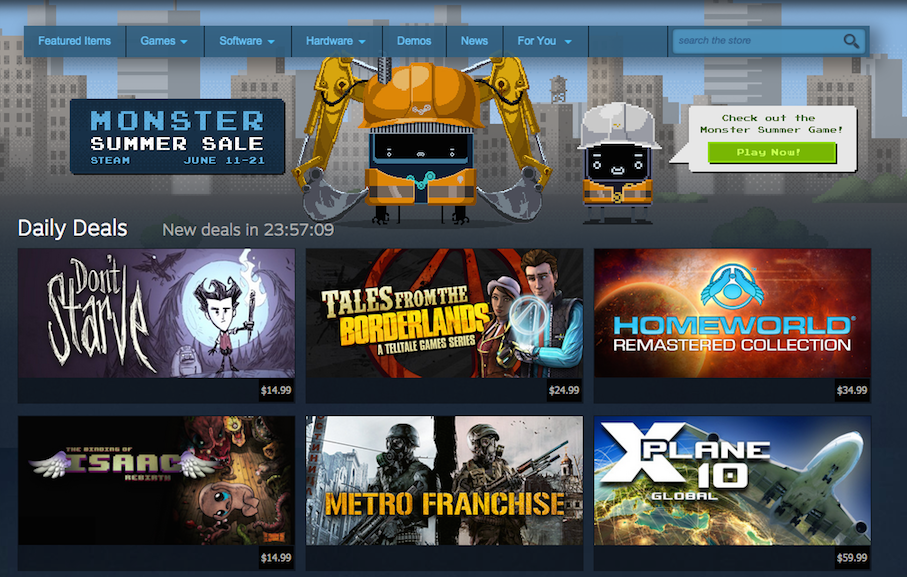 It’s over now, but we can still talk about. Did you enjoy the Monster Game that came with this sale? How many Monsters did you kill? I managed to squash more than 100,000 of the little buggers, a bit quaint compared to the millions people were racking up. Monsters aside, the sale brought many to deals, what did you manage to nab? How big is your back-log at this point?

Let us know in the comments about what you walked away with in the sale and any other story discussed here. Always glad to hear what the readers have to say.